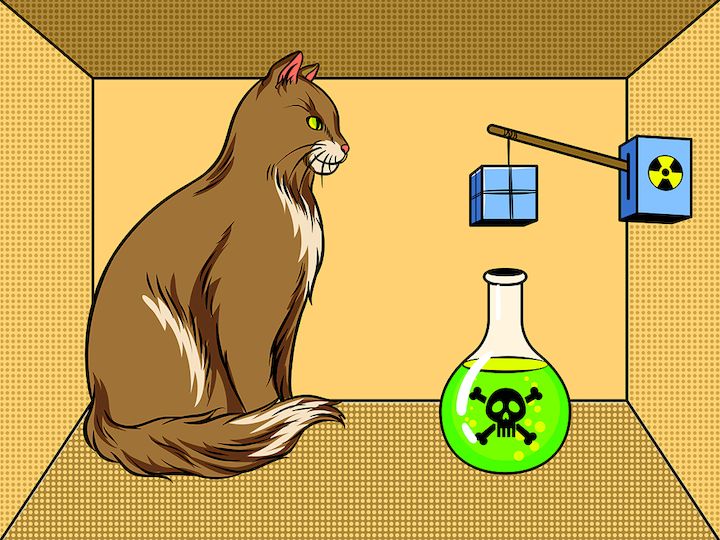 This week we have been discussing an interesting point of planning law. That of multiple competing planning applications on the same land. This revolves around two pieces of case-law and a well know thought experiment called Schrodinger’s Cat!

In Staffordshire County Council v NGR Land Developments Ltd 2002, the Court of Appeal held that where one piece of land had the benefit of two inconsistent planning permissions, both remained valid so long as development under one permission did not make implementation of the other permission physically impossible. This is quite a sensible standpoint from the Court of Appeal as it recognised that planning applications do not need to be the all or nothing. Splitting a development into components is fine as long as they do not compete with each other.

What about the Cat?

In 1935 Erwin Schrodinger postulated a thought experiment which demonstrates this phenomena perfectly.

Schrödinger’s cat: a cat, a flask of poison, and a radioactive source are placed in a sealed box. If an internal monitor (e.g. Geiger counter) detects radioactivity (i.e. a single atom decaying), the flask is shattered, releasing the poison, which kills the cat. The Copenhagen interpretation of quantum mechanics implies that after a while, the cat is simultaneously alive and dead. Yet, when one looks in the box, one sees the cat either alive or dead, not both alive and dead. This poses the question of when exactly quantum superposition ends and reality resolves into one possibility or the other.

In Pilkington and others it was held that the planning authority can not give preference to any one of the schemes or refuse to assess the application unless they are deemed vexatious (an identical scheme following a dismissed appeal).

It is only until the landowner lifts the lid of the box and selects the scheme to be implemented that the quantum state of the other schemes ends and they are rendered incapable of implementation.

In the sage case Sage Lord Hobhouse “When an application for planning consent is made for permission for a single operation, it is made in respect of the whole of the building operation. There are two reasons for this. The first is the practical one that an application for permission partially to erect a building would, save in exceptional circumstances, fail. The second is that the concept of final permission requires a fully detailed building of a certain character not a structure which is incomplete. This is one of the differences between an outline permission and a final permission”

What is clear from that judgments is that the scheme of the planning legislation is a holistic one. It is not a scheme which can be sidestepped or avoided even in respect of relatively modest matters. The practical implications are that a developer may apply for as many forms of development on a particular site as they wish so long as one permission does not prevent a subsequent permission being implemented. Where the impossibility question arises, the proper course is to apply to the planning authority for either a new permission, relying upon the earlier permission as a material consideration.