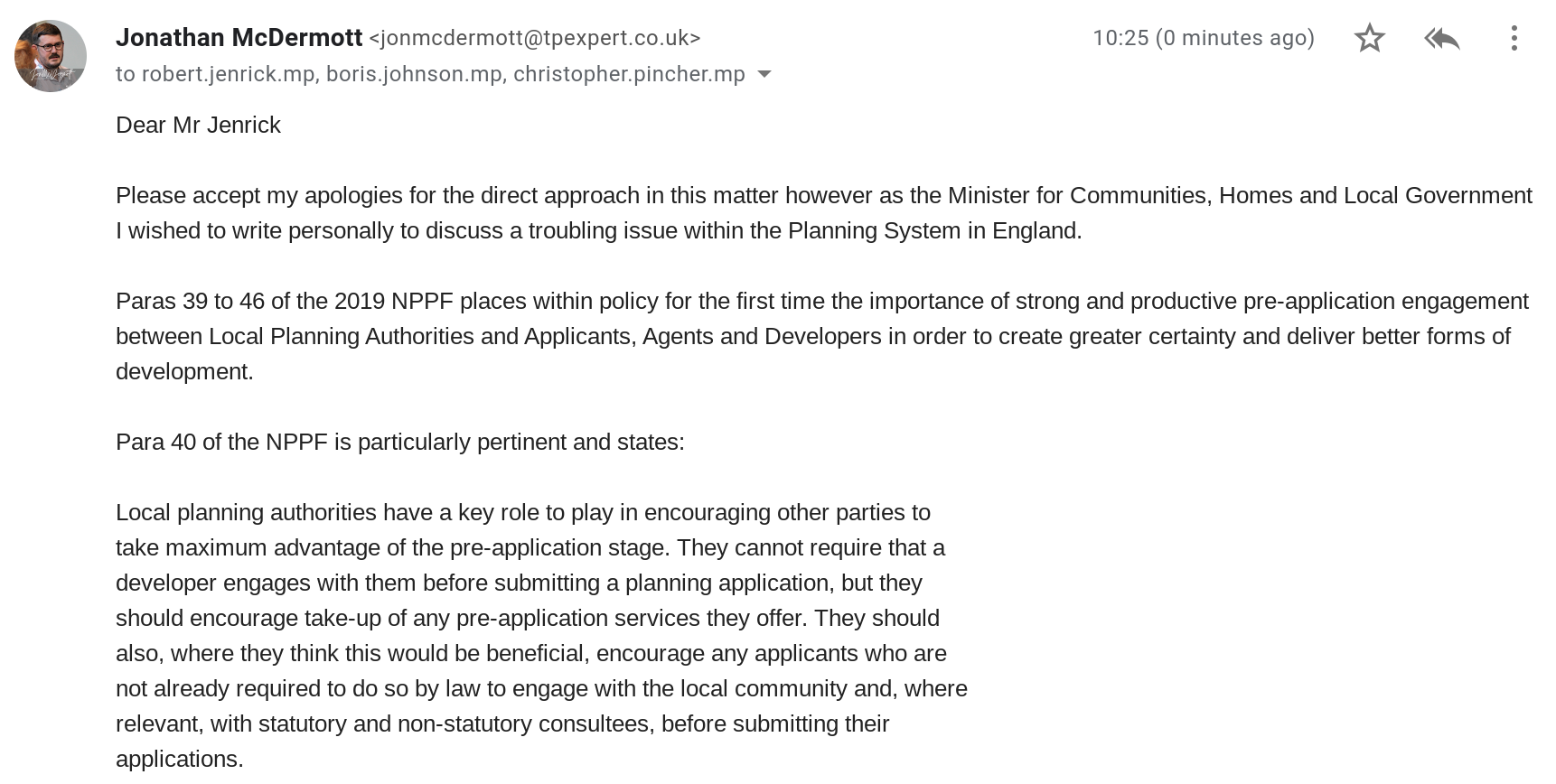 Please accept my apologies for the direct approach in this matter however as the Minister for Communities, Homes and Local Government I wished to write personally to discuss a troubling issue within the Planning System in England.

Paras 39 to 46 of the 2019 NPPF places within policy for the first time the importance of strong and productive pre-application engagement between Local Planning Authorities and Applicants, Agents and Developers in order to create greater certainty and deliver better forms of development.

Para 40 of the NPPF is particularly pertinent and states:

Local planning authorities have a key role to play in encouraging other parties to take maximum advantage of the pre-application stage. They cannot require that a developer engages with them before submitting a planning application, but they should encourage take-up of any pre-application services they offer. They should also, where they think this would be beneficial, encourage any applicants who are not already required to do so by law to engage with the local community and, where
relevant, with statutory and non-statutory consultees, before submitting their applications.

Whilst these sentiments are laudable there is a fundamental disconnect between the NPPF, the pre-application services actually offered by LPA’s and the weight developers can actually place on that advice in making decisions on whether to develop buildings or sites.

As LPA’s are not held liable for any pre-application advice offered either by themselves or by the courts it is often the case that they will renege on advice issued within pre-application enquiries or be inconsistent between enquiries.

As planning consultants we look to LPA’s to provide pre-application advice and be consistent in their dealings between pre-app and main applications.

To offer some examples:

In another case in Croydon pre-application advice was requested twice on the same site. The LPA offered inconsistent advice citing that a change in planning officers resulted in a change in opinion.

In a final, and most recent example in Chelmsford, pre-application advice was sought twice for the conversion and extension of a derelict public house. design advice was offered, taken and fully incorporated within the scheme. The development was summarily refused by the self same planning officer for design reasons deemed acceptable at pre-application stage.

Amongst other pressing issues it is these inconsistencies that draw in to question trust within the present planning system and moreover whether even an altered system would actually be fit for purpose.

As a practising Chartered Town Planner with some 19 years in the field I have watched the culture and attitude of planners within LPA’s shift from a point of approval unless material considerations dictate otherwise to a point of refuse unless otherwise justified. Sadly it is this ‘guilty until innocent’ approach that is driving down confidence within the system.

I look forward to your considered views on this subject and would be more than happy to discuss our insights further.

Update! We have a response.

The Relevant Sections of the PPG referred to are here.